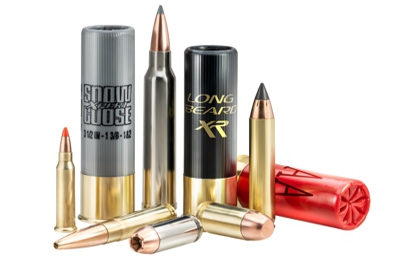 On this page you can reaad about the following: (Click on Topic)

People say that it is expensive to use cheap ammunition. Hunting these days have become so expensive that it would be risky to lose your animal for the sake of saving a few rands on hunting ammunition. We always advise customers to use a better quality bullets especially using high velocity calibers at short range.

One must always remember that any rifle can only stabilise a certain range of bullet weights and that going outside of that range you will definitely not find accuracy. There is also no definite rule to give you guaranteed accuracy, so at the end you will only know the result by testing different bullets and weights in your firearm.

One big factor in calculating ideal barrel twist rate is the length of the bullet. Expanding bullets is made from solid copper to Jacketed lead core bullets. Because copper weighs quite a bit less than lead, the ratio of the volume of the copper and lead used in a specific bullet will determine the length of the bullet. One could say as an example that the optimum bullet weight for a 30-06 caliber is 180 grains. If we take a solid copper bullet like Barnes X ir the local Frontier Spartan bullet the length of this bullet will be considerably longer that the PMP standard bullet which has a thin jacket. This would mean that the ideal twist rate if calculated for both bullets would be different.

The second factor to determine the bullet length is obviously the shape of the bullet. A round nose bullet would be shorter that the sharp pointed bullet. This should also be taken into account if you select your ammunition.

Round Nose Bullets is good for Bush hunting because they deflect less when hitting light brush or grass and you can also shoot heavier bullets more accurately, but they have terrible aerodynamics for shooting far and they expand much more rapidly on impact. Use only in heavy calibers with lower velocities at short range.

Spire point bullets is good for aerodynamics and bullet expansion so they simply work better if you use a well constructed bullet. The down side is that you will be using a slightly lighter bullet at higher velocity, which will give you a less desirable result on the animal. For hunting, a stronger constructed bullet is always recommended because you will have much better terminal performance. Bullets deform and break up on impact on the animal, and you will only have what is left of the bullet to penetrate to the vitals. There is also a great advantage  in having the bullet exit the animal as you will have a proper blood trail and the animals blood pressure will drop considerably faster causing a quicker kill.

Coming back to the bullet construction, the jacketed lead core bullet will give you a heavier bullet for a specific length as opposed to the solid copper bullets. This means that when shooting at long distances the heavier Jacketed Lead Core bullets will give you a better ballistic coefficient (aerodynamics), and the heavier bullet will also give you more terminal energy and better penetration. Solid copper bullets also needs more velocity to give you proper expansion and if you don't have velocity, shooting at long distances the bullet might not expand enough for proper terminal results.

We always reccomend to our clients to shoot the heaviest available sharp pointed bullet that shoots the best grouping in your rifle. Accuracy is much more important than trajectory, and bullet strength than financial cost. The best concepts in bullet design is a heavy jacketed core bonded bullets and the A-Frame design like Swift and Nossler. Many bonded bullets are available from Norma, Federal, Hornady, Woodleigh and so on.

One Gun, One Bullet:

We don't believe in good all rounders. There are certainly calibers batter suited for a wider application, but none is perfect. With the right Caliber, Quality Rifle and Scope you can set yourself up with one type of ammunition to use all over. If you have multiple bullet weights you will be forever sighting in your rifle and searching for accuracy. Using only one type of ammunition will improve your confidence on the hunt.

We stock most popular calibers in the available brands. We will source ammunition for you if we don't have stock. With our experience we will guide you to use the correct ammunition at affordable prices. Click on the logos to visit the product web-page.